How to install PackSymbol font on Windows PC

How to install PackSymbol font on a Mac

Fonts can be installed in several folders in OS X, but we recommend that you do the following:

First, close any open applications. Newly installed fonts may not appear in your font menu if you ignore this step.

OpenType is a cross-platform font file format developed by Adobe and Microsoft. The same OpenType font can be used in both Macintosh and Windows computers.

OpenType feature support lies in the distinction between characters and glyphs. Characters are the code points assigned by the Unicode standard, which represent the smallest semantic units of language, such as letters. Glyphs are the specific forms that those characters can take. One character may correspond to several glyphs; the lowercase “a,” a small cap “a” and an alternate swash lowercase “a” are all the same character, but they are three separate glyphs. One glyph can also represent multiple characters, as in the case of the “ffi” ligature, which corresponds to a sequence of three characters: f, f and i.

PackSymbol fonts depend on the advanced OpenType features to substitute the required packaging symbol when required keyword is typed in an OpenType supported application, such as InDesign, Illustrator or QuarkXpress. For example for the symbol for Biological Risks is automatically obtained by typing biological risks.

How to use PackSymbol with Adobe software

First ensure that ‘Ligatures’ is enabled, then type the keyword for the required packaging symbol. 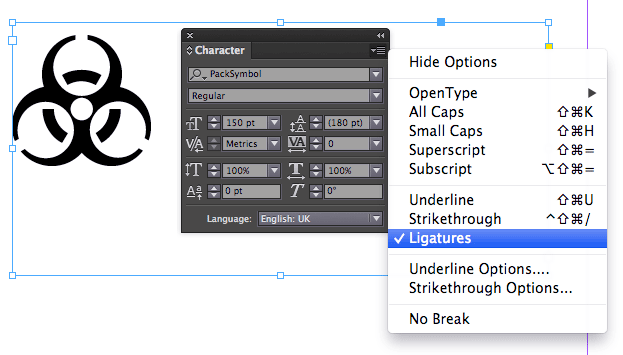 Alternatively choose the required symbol from the Glyphs pane.